The cowards flee to the darkness, huddling like vermin. 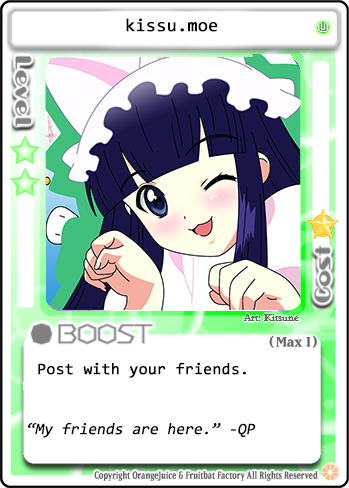 Kissu(at this point) won't be updating off of vichan anymore since the only updates are for paid things, these will be private updates most likely so there won't be any new content to get from them(We'll probably end up doing a bunch of clean up to post.php to make it easier to read anyways).
Likewise, at this point kissu has copied everything it needs from NFPChan so there's not much to look at from them. They're likewise stalling and doing mostly small updates.

Kissu's plans is to be developed for probably the next two years I guess. hard to tell, but there are a lot of UI improvements that need to be done to make it a competitive software against proprietary futaba. Feature wise kissu is already competetive, but the UI is shite so that needs to be worked on.

I also might do some things like remove flags and other /pol/ tier garbage from the software. There are also some other features like compatibility with NNTP but I think that's all dead so if it's a performance impact that might get removed.

Kissu could probably be called in a beta state when I finish off the mod and polling features. This meaning that the priorities will no longer be for grand new features that will differentiate the board from others(we have to stop updating sometime) and will be optimizations on the ways things are already done.

Last things I'm going to add are mascots and updates to the post form,
then a polling system and making the mod system more easy for fast boards.

At that point all the terrible vichan bugs have been fixed and the only thing left are issues with the user interface(which pales in comparison to 4chan's) so best to focus on improving the board speed, community and user experience than developing new improvements and features.

There are still some new things people asked for from there and I guess for S4 I'll have to put everything people have asked into a giant poll and have voting be done on them.

S2 goals have been finished.

The site software now has some good tools against spammers and ban evaders that can be used to lock out people from the site if they use proxies, VPNs or Tor. A few other mod tools as well.

On the cosmetic side, the CSS(kissu.css) is being worked on and optimized to cause less of a slowdown on browsers.
The site code needs to be refactored and the github cleaned up a little.
User experience needslots of improving. Things like the catalog need to be fixed up and the main posting behavior needs additions(such as the update box like 4chan has).

Other than that, the site is looking great. No complaints and as far as I can tell current features seem to be appreciated by current members.

For all intents and purposes, the S2 objectives of adding new things to the site is done. I'm just fixing bugs and refactoring/organizing the code. Really all that needs to be done is more style and placement of certain elements.
This videoplayer buisness is mostly a stand alone project that will run on the server, but it isn't actually part of the imageboard itself.